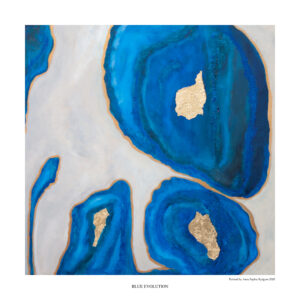 The Swedish artist Anna Sophia Rydgren is inspired by bodies and faces as well as simple organic forms from nature. Color and form have always been part of her life. She paints mainly with acrylic and liquid ink, but also uses other techniques such as watercolors and oil pastels, using brushes, spatulas and sponges.

One example is Blue Evolution: these abstract and minimalist figures glide imperceptibly on the canvas, emanating brightness and intensity by accentuating the different shades of color.

The latter is fundamental within the artwork: blue is the noblest and it is a metaphor of spirituality, transcendence and contemplation. It is a “metaphysical” shade and is linked to relaxation and reflective states: it therefore refers to unconscious depths and introspection.

The strength of this color pushes the structures to free themselves in the immense surrounding space, with a totally neutral nuance, almost to the point to reach something divine. The center of these floating structures is immersed in gold, creating a surreal and fascinating atmosphere. Recalling the Art Nouveau and the great works of Gustav Klimt, Anna Sophia creates a link between the physicality of the forms and the rest of the composition. A great golden light radiates and blends with blue, creating an expressive atmosphere pervaded by abstraction beyond time and space.

The artist aims to give the viewer a sense of calm and harmony, through both the use of tones that penetrate the human nature and the simplicity of the figures from which a slight dynamism emerges. 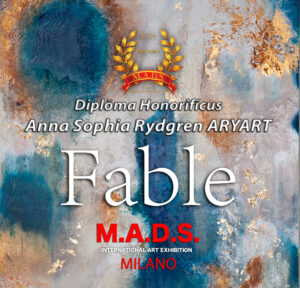 Anna Sophia Rydgren’s work presented at the exhibition “Fable” has all the enthusiasm and love for the subject represented: in “Blue Peacock” an intense artist emotion stands out, with the representation of this animal so magical and mysterious.

Being a memory of her childhood, Anna Sophia is inextricably close to the depiction of the peacock: the shape and colors of the bird fill the soul with joy and its symbolic meaning gives harmony to the various elements of the universe. Since ancient times, the peacock has symbolized longevity, spring and rebirth. Its wide, glittering tail, defined as the “hundred eyes”, is the emblem of the sunlight emerging from the darkness like a fan. According to legend, its thick plumage covered by iridescent colors was able to expand itself to the extent to transform the venom of a snake into solar substance, while its eyes were considered a symbol of God’s omniscience.

In fact, in this painting the artist is inspired by the peacock’s eye, emphasizing both the desire to imprint a precious gift of nature and the love for art. The essence of the material emerges from the canvas, an immense expanse that follows the shades and the swaying of the sea. From the ripples one can glimpse precious shades, such as bronze and gold, suitable for such a royal animal.

Moreover, an immense blue expanse blends perfectly with the glacial white, creating an ocean like a parallel universe, where the peacock is its king. Every tonality is so vivid and penetrating that it involves anyone who observes the work.

And as in the constellations, this three-dimensional space is made up of numerous details, a multitude of hidden cracks that emphasize those brilliant shades. Eternal beauty resides in one’s soul and the peacock, symbol of positive change, helps the viewer to illuminate his path, surrounded by shadows, and to radiate the surrounding atmosphere. This bird merges with the pictorial material, by creating an interweaving between art and the evolutionary power of the forces of nature, which finds representation in this chromatic expanse.

The observer needs to immerse himself completely in Anna Sophia’s work and let himself go, so that he can begin a journey into his own introspection and deepest emotions.